The movie looks at the history of development cooperation since the 1960s and shows different poverty reduction strategies that were tried out over the course of the decades. 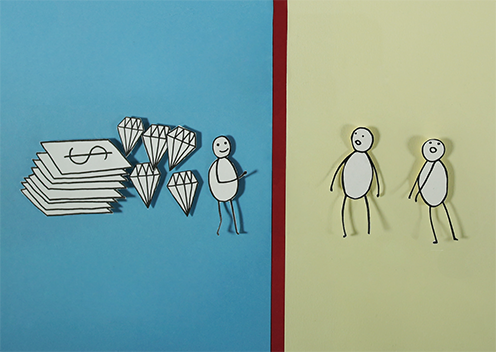 Poverty is defined differently in each country. To measure “relative poverty”, a person’s available income is compared to the average income of the society in which they live.

On the other hand “extreme poverty” or “absolute poverty” describes the situation of people who do not have enough financial means to cover the vital necessities of life. These people are living below the poverty line. More

The poverty line describes a level of income under which it is no longer possible to buy the essentials for day-to-day life. According to the World Bank, extreme poverty in the US is present when a person has to survive with less than USD 1.90 per day or USD 57 per month. For each country this amount is adjusted according to purchasing power, meaning how much can be bought or consumed with a certain amount of money.

According to the UN, in the last 25 years worldwide extreme poverty has reduced by half. In 2015, however, 9.6% of the world’s population were still living in extreme poverty. 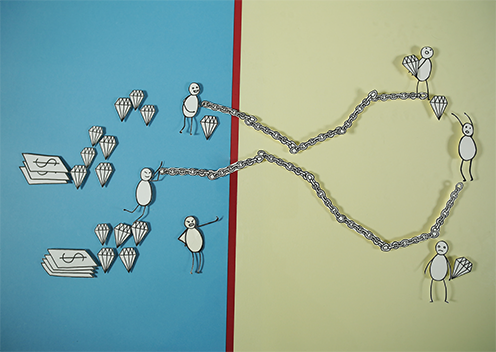 The expeditions of the Portuguese to Africa and the Spanish to the Americas from the late 15th century onwards marked the beginning of the colonisation of the world by European states. Over the course of 500 years the European powers brought many areas of Africa, America, Asia, Australia and Oceania under their sovereignty. Their quest was to develop new settlements and new markets and thus extend their power. More

The colonisation was accompanied by slavery and the emigration of European settlers. These population movements led to the spread of European notions of culture, Indo-European languages and Christianity. At the same time worldwide economic and political interdependencies were developed. The unequal terms of trade that favour the former colonial rulers even today are an example of the legacy of the colonial era.

Since the end of the 18th century more and more colonies achieved their independence through bloody conflicts and became nation states. Although most of the colonies became independent in the 20th century, some regions are still occupied today. 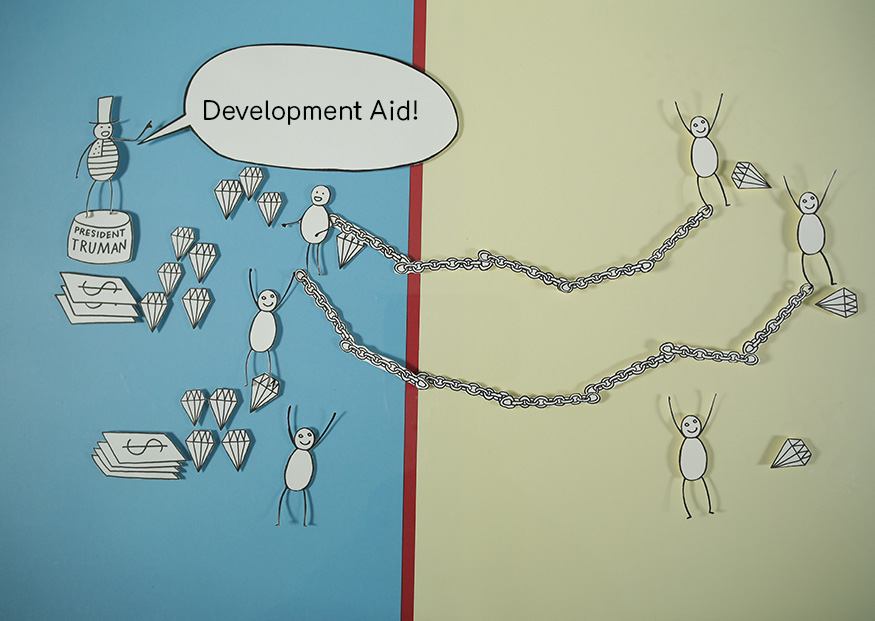 The inaugural speech by US President Harry S. Truman in 1949 is considered the hour of birth for development aid. Truman stated that half of the world’s population was living in poverty and pledged to free these people from poverty. According to him, for the first time in history humanity possessed the knowledge and technique to achieve this. The background, however, was not just the desire to help, but also the fact that poverty was seen as a threat for wealthy countries. Moreover, development aid was seen as an instrument to promote one’s ideology and to prevent communism from spreading. More

The concept of development aid was inspired by the Marshall Plan, through which the USA had helped Western Europe to rebuild economically after the Second World War. The idea was for development aid to work in a similar way: It was to lead to economic growth and to an increased income per-capita, and was inevitably tied up with the political agenda of the donor states. 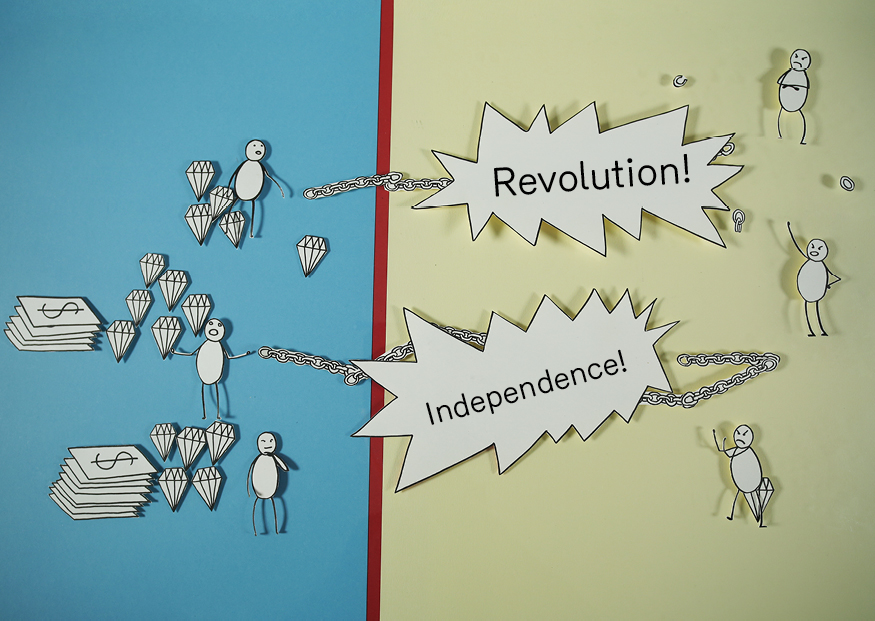 In the 1950s a new world order emerged out of the debris of the Second World War. Two superpowers assumed control at the helm.

On one side stood the US, who together with their Allies constituted the First World. These were countries with a high living standard such as Australia, Argentina, South Korea and most Western European countries. More

On the other side the Soviet Union formed the so-called Second World, together with the other socialist countries. What these countries had in common was the pre-dominance of a communist party and a shared identity as socialist societies. These included Eastern European states such as Yugoslavia, but also states like China, Cuba and Ethiopia.

In contrast, the self-titled Third World was a union of mainly Asian and African states who neither belonged to the First nor to the Second World. They were first and foremost poor states, striving to improve their economic situation and wanting to fight against colonialism and racism.

The conflict between Western powers (First World) and the Eastern bloc (Second World) is known as the Cold War. The Third World remained neutral in this conflict and did not belong to either side. The First and Second World states competed for influence in the Third World, in order to spread their respective ideologies and therefore impose their economic and political interests. “Development Aid” served as an instrument in achieving this goal.

With the end of the Cold War the term “Third World” became a synonym for developing countries, respectively for countries considered to be poor according the World Health Organisation (WHO). 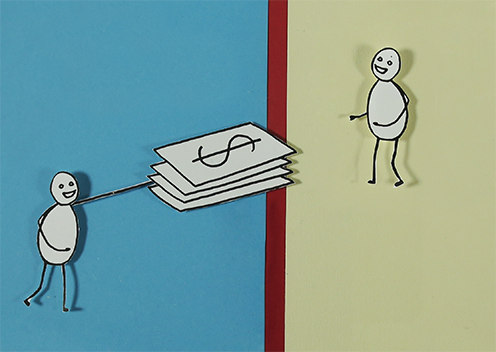 In the 1960s it was believed that money could solve the problems faced by developing countries. Based on the assumption that underdevelopment was the result of a lack of capital, poor countries were supported through loans. More

The expectation from this was local economic growth, leading to a reduction in poverty and unemployment, and effects of prosperity such as better education and health. It was hoped that prosperity would trickle down to underdeveloped“ areas and sectors (“trickle-down effect”). The integration of developing countries in the global market was thereby supposed to act as an engine of growth.

However, the desired effects did not happen. As the impact of investments were analysed, the conclusion was that there was still a preponderance of poverty. The loans that had been made ended up in the hands of the few, who got rich out of these investments. Yet the majority of people remained poor.

A direct consequence of the loan policy was the increasing debt incurred by the debtors. In the hope of the quick growth they had been promised, they had taken on loans which ended up spiralling into corruption, bad investments and unaffordable interest rates. The foreign debt which emerged as a result of borrowing contributed to many developing countries almost going into bankruptcy in the early 1980s, and slipping into difficult economic, social and political crises. 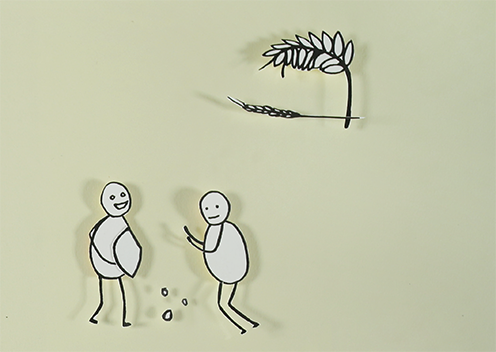 As the strategy “development through economic growth” was unsuccessful, a new theory developed in the 1970s: it was presumed that growth would follow as soon as the basic needs of people were taken care of. More

During the time when Robert McNamara was president of the World Bank he developed a so-called basic needs strategy. The slogans were “food for all”, “health for all”, “education for all” etc. Instead of money, food and other basic goods were sent to developing countries and educational institutions and health services were put in place.

However, the situation did not improve in the 1970s and sending basic goods had a negative side effect: local suppliers were marginalised from the markets because they were unable to compete against free aid supplies. Today we still have a similar situation when state subsidised products are exported en masse from high-income nations to developing countries and are cheaply sold there. 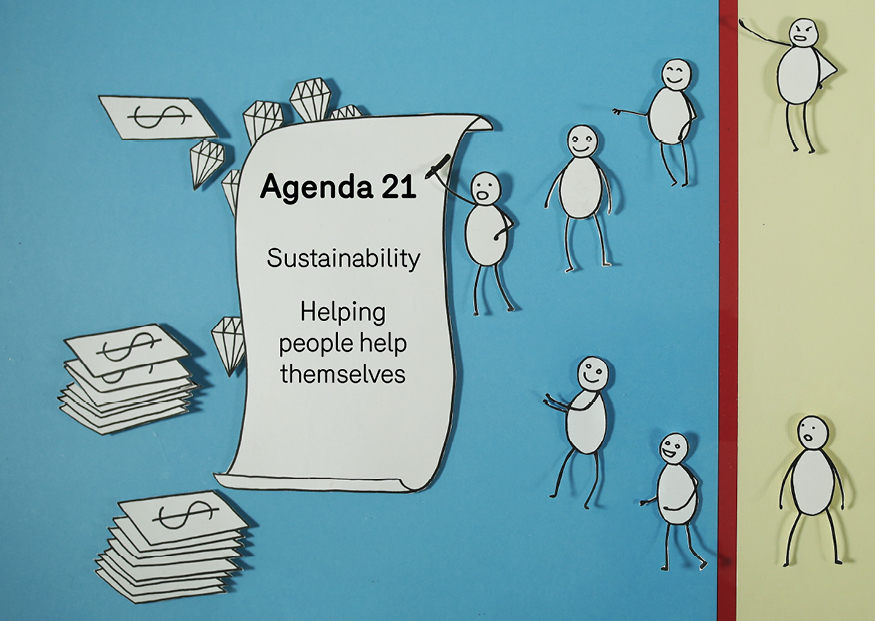 In 1992 the United Nations met in Rio de Janeiro at the Rio Conference for Environment and Development. At this conference the co-called “Agenda 21” was adopted, a developmental and environmental programme of action for the 21st century. The meeting marked, at least on paper, a fundamental rethink away from development aid and towards development cooperation. More

In Agenda 21 a new common policy in development politics was defined: the principle of “help by helping yourself”. Development policies were to be aimed at enabling the disadvantaged groups to help themselves. One of the strategies, for example, was to provide micro-credits to enable autonomous investments. Another policy was to promote rural development, allowing farmers to carry out their business in the spirit of self-sufficiency.

The collaborative understanding of development cooperation meant that the relationship between donors and recipients was increasingly questioned and local circumstances were more often taken into consideration. The focus shifted towards promoting economic autonomy, instead of development policies which often resulted in financial dependence. As a result extreme poverty was drastically reduced. 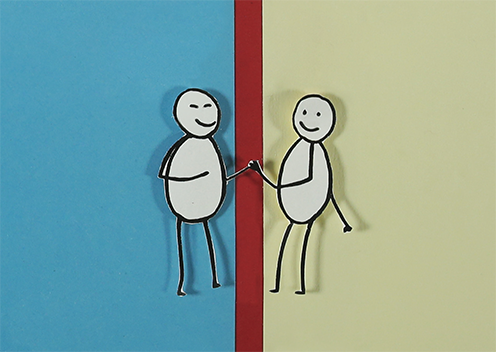 In reaction to this disastrous state of the world, eight “Millennium Development Goals” or “MDGs” were adopted. In contrast to earlier policies, these goals were more comprehensive, more concrete and, in their majority, were given an unequivocal time frame. For example, between 1990 and 2015, the number of people living in extreme poverty was to be halved and child mortality was to be reduced by two thirds.

Already by 2010 one of the major targets of the Millennium Development Goals was achieved. Absolute poverty in the world was reduced by half. This came about not just through development politics, but also through the economic boom that happened in countries such as China and India. Although not all of the goals could be achieved by 2015, fundamental improvements had been made, such as the increase in children who attend primary school, improved access to clean drinking water and success regarding health care, as well as the fight against infectious diseases (e.g. reduction of mortality rates of children and mothers, reduction of HIV infections). 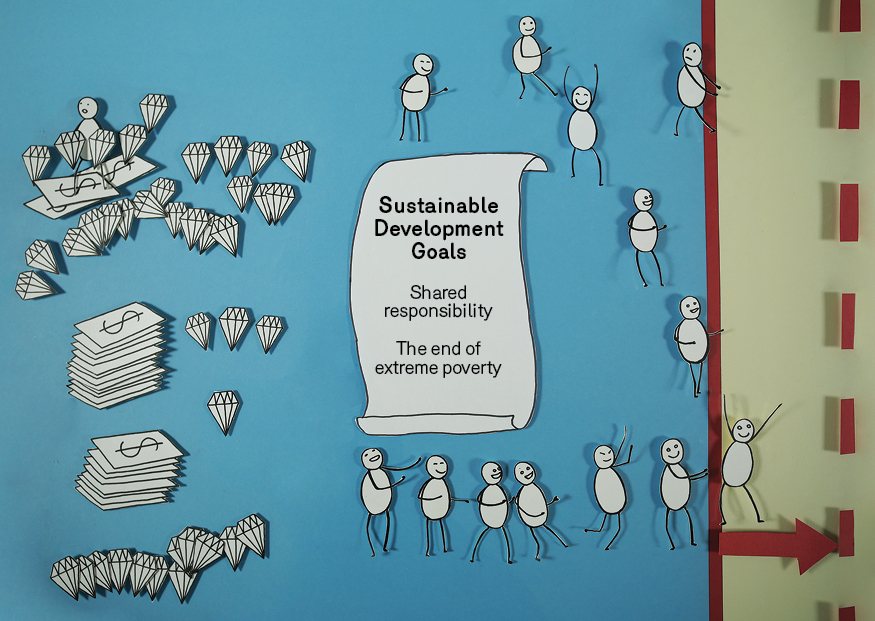 The “Sustainable Development Goals” or “SDGs” were adopted at the UN General Assembly in 2015, with the aim of being implemented between 2016 and 2030. They include the ambitious proposition to end worldwide poverty and hunger and to combat climate change and its effects. The protection of ecosystems and the promotion of sustainable economic activity and growth are also a priority. More

In contrast to the “Millennium Development Goals” or “MDGs”, the SDGs included more economic and particularly ecological aspects alongside the social development dimension. A further difference is that the MDGs were particularly aimed at developing countries while the SDGs were intended both for developing and high-income countries. They thus put a stronger focus on the idea of shared responsibility and demand a contribution from every country.